The Advantage Of Getting Android App Development India Specialists.

Indian programmers using the Android OS have earned worldwide acknowledgment of their knowledge and skills regarding that OS. One reason you may want to hire Android app developers in India specialists (such as Hypertech InfoSystem) who charge less than programmers based in other countries. At the same time, these Indian programmers can deliver results that are at par with the world’s best. This combination of low pricing and quality work is why many companies (even those from First World countries) seek out the services of Android specialists from India.

The key to making a great Android app is to find programmers with both technical and artistic skills. This means your preferred programmer should know all aspects of using the Android OS but still be able to render artistic design for the app. It is actually not that easy to find such programmers – often a programmer may be blessed with technical skills but is lacking in artistry for the design aspect. Hypertech InfoSystem can give you the pick of the best Android specialists we have so that your project will not only perform well but look great as well. 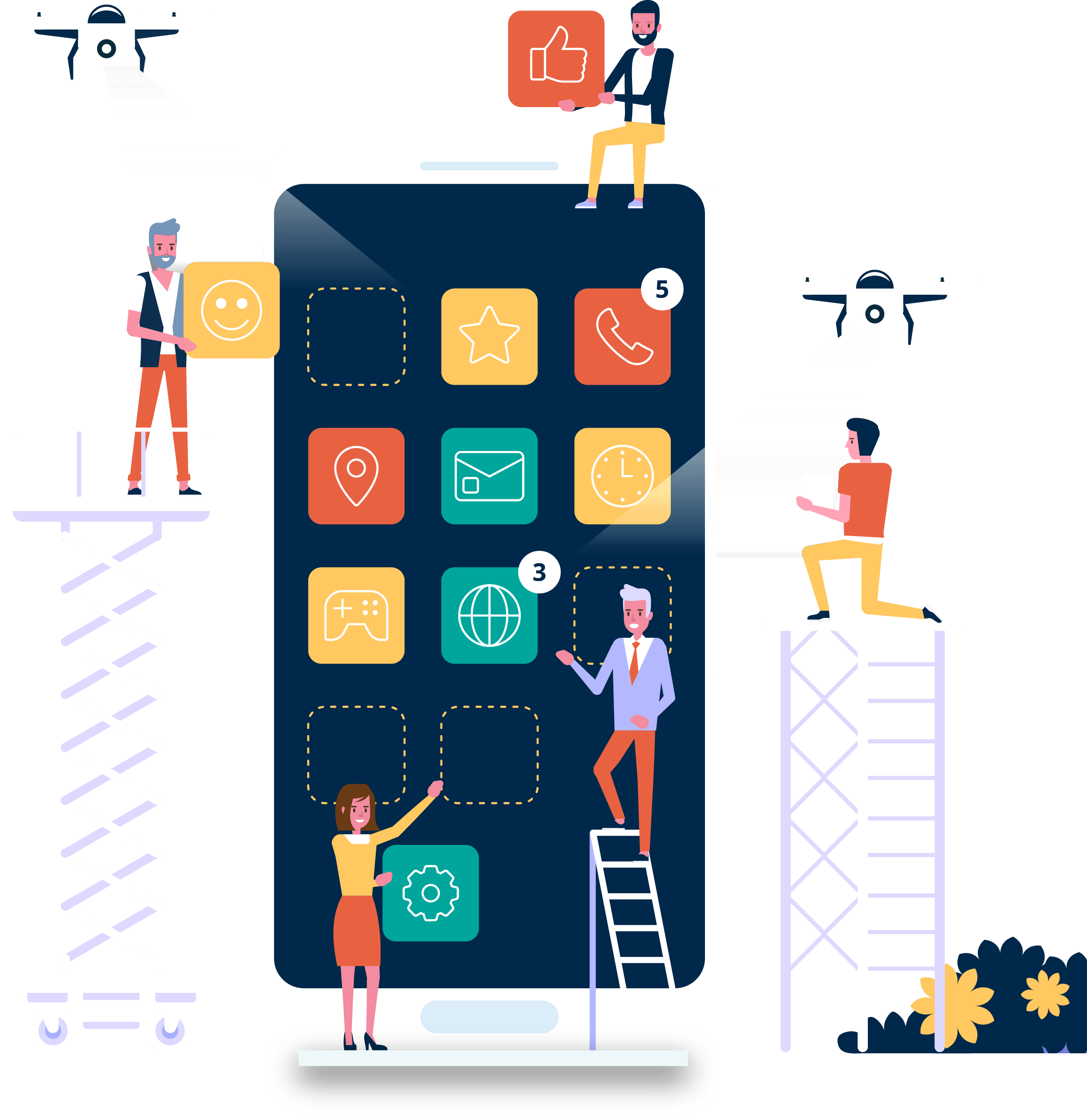 You also need a company that specializes in Android app development and that understands cross-browser compatibility. The company should have customer service ready to accommodate clients from different time zones and from different countries. Some types of apps may be more popular than others but ideally, your preferred Indian app developers should be skilled enough to handle any type of app development categories. In addition, the programmers should know how to create apps for multiple types of mobile devices so that regardless of what mobile device you present to them they can accommodate your project requirements..

If you are comfortable with the idea of outsourcing your Android app project to a company overseas, then you might consider our company to serve you. We may be based in India but we will give you regular updates about the work we render so that it will seem like your project was being made just next door. We will be happy to show you our portfolio of done work to prove that we have the high-quality technical skills for the Android platform and that we cost much less than other app programming companies. If you wish for a free trial service, that is possible to so that we will know how much our pricing should be for the magnitude of your project..

Android – which is a fast-growing operating system for smartphone devices has been famous for its every update. Its many-sided, user affable applications & flexibility has made it more favorable. Android applications are the best thing in the current market and are growing over the usual public like wildfire. No wonder, there is a booming demand for Android app development in the world. In this growing market, to find a suitable partner who can provide expertise on Android app solution has become crucial for startups, large and small organizations across a wide range of business.

As a leading Android app development company and with an experienced team of Android app developers; they solve business problems and help startups & enterprises' problems with Android technologies. Our team comprises of experienced Android developers with great proficiency in the platform as well as all its versions. Our extensive platform-expertise makes us capable to provide a full range of Android app development services that are a perfect match for the client’s demands. We live up to mark for the clients’ particular project demands that help them to accomplish their desired business aims.

Android is an open source platform which allows developers to develops apps very easily. Really, it offers faster and relatively low-cost development for business and start-ups.

Android provides you with an amazing platform to develop apps and games for millions of Android users. This allows you to reach out to a higher section of the android users and improve your market perception.

Android gives you everything that you need in terms of application development. It automatically enhances your UI on different mobile devices, while giving you full control on your UI for different device types. Android developer tools offer a full Java IDE with features to develop, debug, and package Android apps.

Apps developed on Android platform are highly customizable and simple to manage. This helps android app development companies to develop custom android apps for businesses. Even the data management and multimedia tools can be simply updated.

Why does Android App Development Company-Hypertech InfoSystem
from India stand out from the rest?

We at Hypertech Infosystem design, develop, test and expand application as per your demand. We bring end-to-end services for Android app development right at your doorstep. Our team of dedicated Android developers works hard to create the best custom native and hybrid apps for the Android phone, tablet, and wearable devices.

Without any delays, Android developers from Hypertech InfoSystem believe to provide faster service and so they plan early to launch at the right time.

With Hypertech InfoSystem, you can be guaranteed the best prices in the market without compromising for quality in any way.

Hypertech InfoSystem will work very closely with you to be sure that you leverage the best business ideas with the latest technology. Hypertech InfoSystem uses a systematic way to design your app with complete integration of suitable functions in the shortest amount of time.

Really, Hypertech InfoSystem is the best choice for many Android app development clients because we provide customized, high-quality apps at affordable prices. Our competitive pricing makes us affordable even for startups and small and mid-sized businesses.

Worldwide the markets of Android App Users are Crossing 2.3 billion with counts. Investing bucks on your business is a better choice. Android App Development creates awareness and worldwide reach seamlessly.

According to the report, App Developers in India have been a popular choice to hire around the globe. Even it is easy to hire specific technology-based developers by visiting top b2b sites like Clutch.co, App Futura, etc.

2. App Developers in India are Affordable

In many cases, the budget becomes a problem to develop the app as budget promises the quality and range of services but companies from India are highly affordable to hire and work. The cost that Indian App Developers charges are less than other countries as per research.

Developing a country’s economy from emerging technology is high in western countries. The demand for app development services is also high from India. The growth of IT industry revenue will reach its peak in the future from the Indian App Development Companies. A survey concludes that 59% are already outsourcing from India to develop apps with the latest technologies.

4. Infrastructure and Policies are Supportive

The education system of India is highly associated as every year number of engineers is given for the top MNC companies like Google, Microsoft, etc. In the IT firms, it has been reported by Statista that India is ranked second in the number of Android app developers.

Indian app development companies are highly associated to offer global standards with their services. The company used to follow quality standards based on

The fact is that 75% of Indian companies around the globe are certified by CMM. And the highest numbers of ISO-9000 certified companies are also from India.

India has multiple headquarters for IT industries. Many companies are available in India like Ahmedabad, Delhi, Bangalore, and Hyderabad. The country has a better infrastructure to develop apps. Many IT companies around India are focusing on various technologies for services.

Cost To Develop An Android App From App Developers in India

The mobile app industry will not gonna stop as the internet rules, application will have life. The demand for application increases each day and especially the Android app creates a high demand for business profits. As per the statistics, 2.8 million apps are available on Google Play Store and also claim that Millennials open an app for 50+ times per day.

It admits that the majority of businesses trying to approach the audience through android apps. The revenue of app developer earns exceed $188 billion as per the survey and expected to grow $900 billion by 2023.

Cost to develop an android app is based on certain factors such as features, design, quality, functional approaches, etc. Balancing with these factors within a budget decides the range of app costs to develop apps.

Android app development is highly approached by many industries to drive their business effectively. It is known that smartphone users are highly available on the android platform. Hence approaching their respective audience with the android platform impresses the performance. Technologies like AI, IoT, Blockchain, AR/VR are highly used by industries like Healthcare, Education, Game, Manufacturing, etc. Working on these technologies from the trusted app development company in India like Hypertech Infosystem helps to create quality services for respective customers.

From booking a cab to analyze the interior design become easy due to the growth of mobile app development technologies. Impress is the requirement from many industries and the app is a complete solution to develop such function. Many industries investing highly in user experience. Giant companies make a huge turn over from user experience design. Design is highly associated with creativity. Thus improving the app matters audience. A survey says that most of the audience interact with the app due to the design of the app. Developing an interactive app makes a huge change in app revenue. We the app development company, highly associated with design rules. Many android apps that we developed are proof of it. The feedback from our clients is the promise to work highly for future clients. Developing an app in India is effortless as ‘n’ numbers of android app developers are available in India. Thus hiring an android app development company from India is profitable for businesses to reach the audience.

In India, Multiple app development companies are available to outsource, and each company cost based on their work exposure and time frame. As per the survey, to develop an android app is fifth to one-tenth of what it cost to develop in the west.

Here is the reason, India has a high source of android app developers thus the work exposure and time frame will be even compared to west-based app development companies. In general App development require the following position,

Based on the above position and working hours, the majority of android app development companies closes their type of service charges. Almost Mobile apps fall in three types,

Investing in a simple range android app will be less compared to other types. It needs only a few team members to work where the person with no need for back-end databases or API functionality can choose this feature to develop an app. It is inexpensive. It may cost around $5000.

Investing in a moderate range android app will be high compare to a simple type. The features and the functionality will be little above the simple type but the output is quite interactive and with profit. It may cost around $10000.

The complex app depends on the functionality that the client requires. Technical approaches will be high compare to both types mentioned above. It can also say it as dynamic apps. Developing a dynamic Android app requires a huge source of developers and testing team. With the demand for the project, in India, it may cost around above > $10000.

HyperTech InfoSystem give the smart solution for your business.